Data Envelopment Analysis is a state of the art benchmarking technique which is particularly useful for multi-criteria benchmarking studies. In DEA, the productivity of a unit is evaluated by comparing the amount of output(s) produced in comparison to the amount of input(s) used. The performance of a unit is calculated by comparing its efficiency with the best observed performance in the data set. There exist many different DEA models, each with its own characteristics. This page will however concentrate on the main concepts of DEA.

A bit of history

Early performance measurement used to principally focus on financial output performance disregarding other areas (such as production or customer service) or ignoring the concept of efficiency. The consequences of this omission prompted econometricians to rethink how conventional econometric analysis looked at production functions and how it dealt with variations in efficiency [1].

Production functions, which model the structure of production, have been developed and refined over more than 80 years (e.g. by Cobb and Douglas [2]). However, Kumbhakar and Knox Lovell [3] point out that while conventional econometrics tends to use production, cost, and profit functions, they assume that producers allocate inputs and outputs efficiently and that producers operate on these functions apart from randomly distributed statistical noise. The authors state anecdotal evidence (p. 2) which suggests that producers are not always successful in solving their optimisation problems efficiently. This can be illustrated by inefficiently utilising the resources (inputs) in the production process (this is called technical inefficiency (Cooper et al., 2007)), or by poorly allocating resources and production targets (this is called mix inefficiency [4]. Producers not solving their optimisation problem correctly were consequently not operating on the production functions used, up to then, to measure performance.

In the light of the clear limitations of traditional production functions, productivity analysis’ focus moved towards production frontiers. The literature that directly influenced the development of frontier analysis methods began in the 1950’s with the work of Koopmans [5] who mentioned that a producer would be efficient ‘if, and only if, it is impossible to produce more of any output without producing less of some other output or using more of some input’. Koopmans’ original work prompted Debreu in 1951 [6] and Shephard (1953 [7] cited in [8]) to develop models which associated the distance function with technical efficiency. This work was critical to the development of further literature on efficiency. Farrell (1957) [9] applied for the first time these developments to measure technical efficiency in an agricultural context. This innovative work influenced the creation of two major frontier analysis techniques: Stochastic Frontier Analysis (SFA) and Data Envelopment Analysis (DEA). The concept of efficient frontier is illustrated in the figure below for a one input, one output case. The best performers are on the frontier line (in this case the best performer is E). 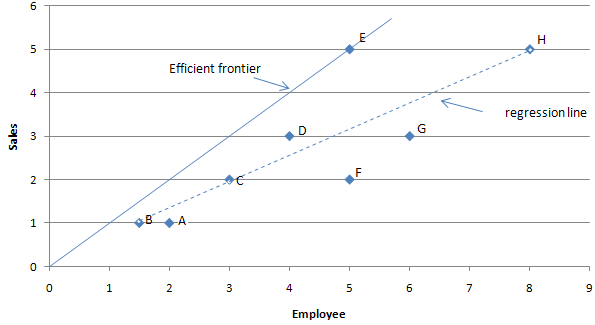 Farrell’s paper (1957) – which did not correctly address mix inefficiencies[10] – prompted Charnes, Cooper and Rhode (CCR, 1978[11]) to develop another frontier analysis method called Data Envelopment Analysis (DEA). DEA is a non-parametric benchmarking method (i.e. which does not use statistical distribution) which measures productivity by considering a system of inputs and outputs. Since this paper, many different Data Envelopment Analysis models have been introduced (e.g. BCC, SBM, ADD or FDH [12], some being drastically different from this original model and DEA has become a well established performance measurement technique.

Efficiency is the ratio between the outputs produced with the amount of inputs used. The ‘volume of sales per employee’, the ‘GDP per capita’, or the ‘average number of passenger per flight’ are common example of efficiency ratio. DEA measures the efficiency of a unit (called Decision Making Units or DMU) using a weighted ration as illustrated below:

The ratio above accounts for all outputs and inputs. This type of measure is called Total Productivity Factor. All DEA models implement similar type of performance ratios although with their own specific characteristics. The weights assigned to each input and each output are variables used in the DEA optimisation process.

The efficient frontier represents the best observed performance in the data set. The concept is best explained with a simple example. Let’s consider the following table showing number of employees and sales figures for some food stores. The efficiency ratio (sales / employee) can be used to measure the efficiency of the different stores The table is as follows:

Plotting this data with employees on the x axis (the horizontal axis), and the sales on the y axis (the vertical axis) will give the following graph:

In DEA, the performance of a DMU is always calculated by comparing it to the efficiency frontier directly determined from the data.

In effect, the further away from the frontier an entity is, the worse its performance.

This can be illustrated by considering DMU C from the previous graph: 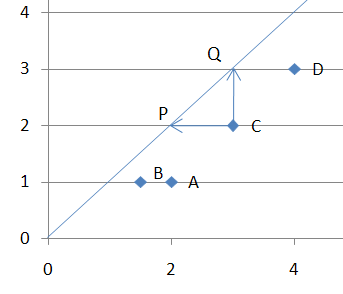 It is important to note that the frontier pictures in the graphs above is assumed to stretch to infinity; i.e. that the performance levels of DMU E (the only efficient store) are possible regardless of the number of employee the store has. This is called Constant returns to scale (Constant RTS). Although the constant RTS assumption is sometimes true for a local range of production, it sometimes need to be relaxed. This is possible with – for example – variable returns to scale which are illustrated in the graph below: 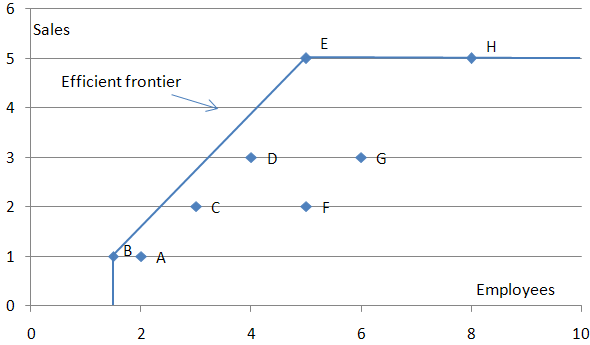 Note that under variable returns to scale, DMU B becomes efficient.

Although DMU H is on the efficiency frontier, it is not efficient. This is caused by DMUE which produces a similar amount of ‘sales’ (i.e. 5) but uses 3 less units of ’employees’ to do so. In order for H to be efficient, it will need to reduce its sales force by 3 employees in order to reach E’s coordinates. DMUH could also become efficient by increasing its sales. However there is no way to know for sure if this is possible as such production levels have not been observed (i.e. above the current efficiency frontier).

There exist two types of inefficiency:

The difference between the two can be best explained with a simple example. The following graph illustrates the performance of different vehicles depots based on 2 outputs: utilisation and sales, and one input: number of vehicles. It is possible to illustrate the performance of each depot by plotting the utilisation/vehicle and the sales/vehicle ratio values. This is illustrated below: 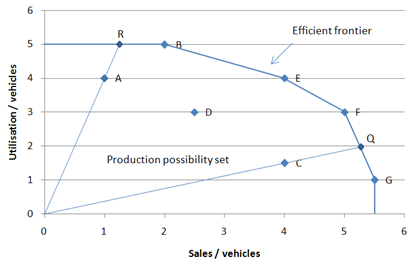 In the graph above, Q, the projections of DMU C on the efficient frontier, is between DMU F and DMU G. DMU F and DMU G are called the Reference Set of DMU C. The reference set of a given DMU consists of the list of efficient DMUs which performance was used to calculate the efficiency of the given DMU.

How does DEA work?

As explained earlier, DEA uses a total factor productivity ratio to measure performance (i.e. a unique ratio with all the inputs and outputs). DEA attributes a virtual weight tp each of these input and output.

Entities’ performance is then calculated using a linear optimisation process which tries to maximise each entity’s ratio by finding the best set of weight for this particular entity.

The optimisation process is contrained by existing data so that each entity is compared against the best observed performance.
This simple example should have introduced most of DEA’s basic concepts. Although the example only used a single input and a single output, DEA is more useful when performance needs to take multiple inputs and outputs into account. More information specific to different DEA models (e.g. CCR, BCC, SBM) will be made available on this site correspondingly to the library releases.

This section lists a few links to different web sites of potential interest. The order in which the sites are listed does not reflect any preference of any kind.

Further information on DEA can be found at the following links:

Further reading on DEA software can be found in this paper from Richard S. Barr.

Some other open source DEA projects

All these projects seem dormant.